Huanglongbing disease of citrus in Cuba

The citrus program in Cuba began in 1968 with the aim of supplying fresh fruit for national demand and the Eastern European market. In 1990, the citrus-growing area was around 144,000 ha and the production obtained was just over one million tons of fruits. Commercial citrus plantations were established throughout the country. The main cultivated citrus species was sweet orange; however, Persian lime, mandarin and Mexican lime were also cultivated. The sour orange was mostly used as rootstock. However, after the detection of the presence of the Citrus tristeza virus (CTV) in Cuba (Batista et al., 1995), rootstock diversification was necessarily implemented.

The disappearance of the market of the Eastern European countries produced a critical national economic situation, which, together with repeated hurricanes and intense drought, has caused accumulated losses of 1,165,000 t of fruits and 131 million of dollars. Therefore, at the end of 2006 the production area was reduced to 42,000 ha, and the production to 288,674 t (Cueto et al., 2006).

The detection of "huanglongbing" (HLB) in Florida, USA in 2005 and the presence of its vector Diaphorina citri in Cuba (González et al., 2000) was the motivation for an epidemiological surveillance and research program on this quarantine disease in Cuba. In 2006 the HLB-associated bacteria was detected in plants showing typical symptoms of asymmetric blotchy mottling of leaves in residential areas from La Habana Province. Specific molecular tests performed using two PCR amplification systems specific for ’Candidatus Liberibacter asiaticus’ (CLas) detection confirmed the presence of the pathogen in the symptomatic samples. BLAST analysis revealed that the nucleotide sequences obtained for the rplKAJL operon (GenBank Accession No. FJ394022) shared 100% identity with each other and 98% identity with sequences of Clas strains from Brazil (GenBank Accession No. DQ471904) and Japan (GenBank Accession No. AY342001) (Luis et al., 2008, 2009). 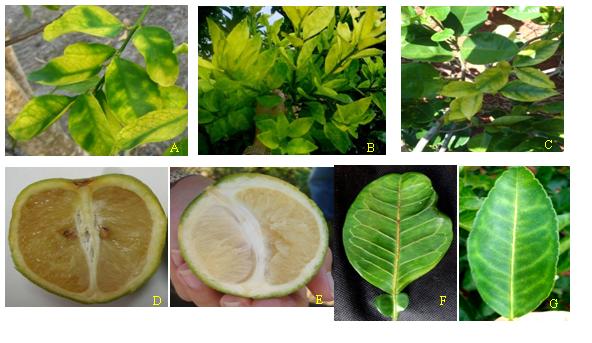 To determine the distribution of the disease in Cuba, surveys were conducted in 11 provinces and in the special municipality Isla de la Juventud. The presence of HLB was verified by PCR in all inspected areas. The symptoms most frequently observed in the infected plants were asymmetric blotchy mottling (figure 1A), yellow shoots (figure 1B), nutritional deficiencies (figure 1C) and deformed fruits with aborted and reddish seeds, sunken peduncle and intense yellow vascular bundles (figure 1D) and twisted columella (figure 1E). Other symptoms were leaves with thickened, necrotic or corky-looking midribs (figure 1F), yellow veins (figure 1G) and premature fruit fall. HLB symptoms were observed in the 20 citrus cultivars present in the country and a laminar guide was carried out for the field identification of the disease (Paredes et al., 2015).

A symmetric blotchy mottling was the most characteristic leaf symptom observed in all the species and varieties analyzed. This symptom was observed in mature leaves in old or young plantations more frequently present from October to March, when temperatures are lower. However, the first symptoms observed were nutritional deficiencies and yellow shoots. Orange, mandarin and grapefruit were the most susceptible species which also showed more symptoms. Lemon trees (Citrus limon Burn), acid limes (C. aurantifolia Swingle and C. latifolia Tanaka, C. volkameriana Tan. & Pasq., C. macrophylla and other similar species) show a very strong leaf asymmetric mottle. In these species, fruit symptoms and defoliation and dry branches were not observed frequently and tree decline occurred more slowly.

The detection of the pathogen was carried out through optical microscopy of fine sections of leaves stained with iodine or lugol. This technique allowed visualization of the excessive accumulations of starch in the phloem that represent a response of the plant to the presence of the pathogen. The analysis showed a 97% correlation of this test’s results with those from conventional PCR, confirming its usefulness for HLB detection in large-scale surveys (Luis, 2014). A duplex PCR was validated for the simultaneous detection of the three species of Clas, using primer pairs GB1 / GB3 and rplA2 / rplJ5. The evaluated parameters of this technique (≥96.9%) showed efficacy for the correct HLB identification from leaves with asymmetric mottle. Also, it was determined that it allowed the detection of the bacterium in leaf samples with other less specific HLB symptoms, such as nutritional deficiencies and yellow shoot, with correlation rates of 43.75% and 68.42%, respectively (Collazo et al., 2010). A nested PCR was validated with primers: fD1 / rP1 (first reaction) and OI1 / OI2c (second reaction), to increase diagnostic sensitivity. Currently, this is the technique used for the certification of citrus propagation material. It has also enabled the detection of the pathogen in nymphs and adults of D. citri, with 95.5% positivity (Collazo et al., 2011). The technique of shoot-tip grafting in vitro has been used for the elimination of Clas in infected plants (Zamora et al., 2015).

Descriptive and explanatory studies of dynamics of populations of D. citri in three citrus areas has allowed optimization of monitoring and control of the vector. Six predators, a parasitoid and an entomopathogenic fungus, which control the vector in all the development stages, were identified as natural enemies (Gonzalez et al., 2008, 2010). Based on our results and international experience three fundamental approaches have been proposed for HLB management: use of certified propagation material produced in insect free greenhouses, preventive control of D. citri and reduction of the source of inoculum through surveys and eradication of symptomatic plants (Llauger et al., 2008).

In Cuba, citrus propagation material is produced in greenhouses and it is guaranteed that the material used is certified and healthy. Control of the D. citri vector has been carried out mainly with insecticides and it has been possible to reduce the incidence of this insect in the orchards. The main problem in the management of the disease has been the elimination of the source of inoculum through eradication of symptomatic plants. This is because it affects the economic interests of the producers and there is no to endorse this measure. The most efficient management is the one employed by Ceballos enterprise, in the province of Ciego de Ávila. In this locality, the inoculum source has been reduced with eradication of symptomatic plants, achieving the lowest incidence of HLB in the country (4.2%) (López et al., 2014, Batista et al., 2017). In the rest of the citrus enterprises, the established strategy has been adapted according to their economic conditions and the availability of land for the new plantations.

Epidemiological studies have been carried out to determine temporal evolution of the disease in orchards of different citrus companies in the country. These evaluations were conducted in blocks of 900 plants with a bimonthly frequency. The results indicated that there are differences in the progress of HLB in areas associated with the different management practices. It was demonstrated that the planting of certified plants far from infected and symptomatic orchards, the elimination of the source of inoculum and the preventive control of the vector are fundamental aspects in the management of the disease (López et al., 2014; Batista et al., 2017).

The presence of HLB in the Cuban citrus industry has caused a strong impact. Investments have been made for the creation of new sources of employment dedicated to the identification and elimination of symptomatic plants. Greenhouses have been built with insect-proof nettings for the production of certified material. Financial resources have been allocated to acquire the pesticides used in the control of the vector, and new means of applying them have had to be acquired. As a result, citrus technology has become more expensive since the arrival of HLB. Simultaneously, losses have increased due to the decrease in production, commercial pressures, and premature fruit fall, economic death of trees, reduction of areas destined for cultivation, losses caused by cyclones, droughts and lack of inputs (Delgado, 2010; Luis et al., 2013). As a result, in 2017 a production of 60,205.9 t was obtained in a total area of 14,000 ha of which 6,000 were under development.